One Hot, One Not 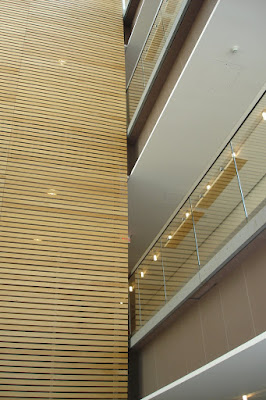 copyright V.Wells 2008
I don't normally trash exhibits or events, but I am going to give a definitive thumbs down to a show I saw at the newly renovated Gardiner Museum of Ceramic Art across from the ROM. Object Factory runs until Sept 7th: I was looking forward to this showcase of industrial ceramic design and found it largely (a) boring and/or (b) dumb. I thought two pieces were funky and original. The rest failed the test. Dejected, I went back downstairs to the regular exhibit of contemporary ceramics, only to find more of the same: again, two decent pieces. And the award-winning (as per newspapers/magazines) new shop fell short, too. Yawn. I went to this show during a free-admission timeslot and felt gypped!
However, the good ol' COC did not let me down. More specifically the Four Seasons Centre for the Performing Arts. (I do dislike naming arts centres after sponsoring companies, but we'll let that go for the moment). Ian Ritchie gave a solid hour-long tour of the building, including the rehearsal hall and different areas and aspects of the opera house interior itself. Okay, so I'm slightly partial to the opera and the building already, but honestly the tour was comprehensive and extremely interesting. Go to their site or call 416-363-8231 for info about inexpensive tickets ($5-7) for this semi-weekly tour, at noon on Saturdays and most Wednesdays. Excellent for both tourists and regular opera or ballet subscribers. [A caveat: photos are allowed everywhere except for the the concert hall itself......?].