Showing posts from May, 2008
Show All

IMPORTANT: DAY OF PRAYER FOR ARTISTS

Wednesday May 28 is the National Day of Prayer for the Artist ~The Good Fight Please pray for all artists, whether they are Christian or not. This movement is out of the US, but will be an association for Beautiful Feet's ministry in the future. Check out their site and more about the Day of Prayer here .
Post a Comment
Read more

Buttoons is very pleased to announce that we have branched out from just corporate orders and are now available commercially at the very hip Lilith, 541 Queen St. West. Drop into the store and check out the eclectic collection of buttons. From cheesegraters to technicolour pitbulls, you'll find something random you gotta have!
Post a Comment
Read more

May 11, 2008
Potāto, potăto, it's the 50th and final day of Easter. From the CCDP bulletin: The Feast of Pentecost was formerly called Whitsunday because it was a day on which many were baptized, hence many white garments. It is the day on which the church celebrates the outpouring of the Holy Spirit on the apostles.
Post a Comment
Read more
May 11, 2008

A cool little project on a quirky site, Colorwars2008 , via zeFrank: Youngme/Nowme juxtaposes kid pictures with reconstructed adult versions. That's fun. Then they also have a merit badge competition to photoshop the best 'new' merit badge. My favourite of those displayed:
Post a Comment
Read more 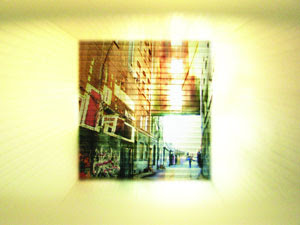 Photo by Nathan Robitaille. Harbourfront Centre has an ongoing exhibit, Sacred Space , supported by the Toronto Society of Architects. You can get a glimpse of the current contributions through that link, or head down to 235 Queens Quay West.
Post a Comment
Read more 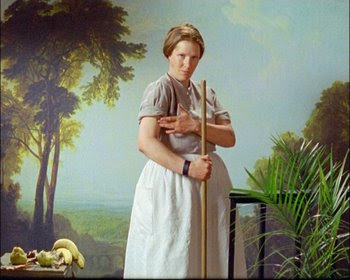 Pauline Boudry and Renate LorenzNormal Work, 2007 While gallery hopping amidst CONTACT photography festival venues this weekend, we tripped upon a very amusing little film called Normal Work at Gallery 44 at 401 Richmond. This is based on the accompanying Victorian photos. If you're in the building/area, go have a laugh. It's very witty. MOCCA 's got some good stuff going on, too. Well, all the venues do.
Post a Comment
Read more 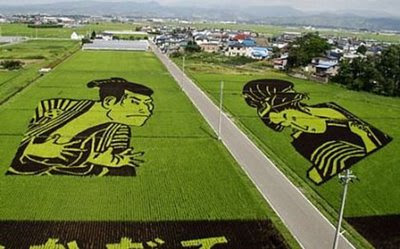 Ok, this one is so weird, it's like a roadside accident--you just can't help looking. You can go to this blog for step by step photos of the production, but here is a sample of what you can do with rice fields if you are so inclined: This, from the same country that has all those insane competition TV shows...
Post a Comment
Read more

May 11, 2008
Wouldn'tchya know....the one slightly useful arts initiative that the feds produced, the Canadian Cultural Observatory enewsletter, has been cancelled. Maybe coz half their announcements were about events in Quebec and half of Canada does not live there, but they couldn't figure out why the general public either knew nothing about it or found it largely superfluous. Ah well. We all know how much the swivel servants have their finger on the pulse of the arts (that would be sarcasm).........Not impressed. Why don't they ever consult and listen to the artists???
Post a Comment
Read more Got a ton of movies and cds in the mail to review, but this is my current fave: Dengue Fever's Venus on Earth. Go to this link and scroll down to their mp3 samples (they haven't allowed downloads so I can't plug it in here). So the deal, as I understand it from the somewhat dubious source of the CBC, is that these two NY guys were travelling and....well, let's make a long story short and say they ended up hooking up (musically) with the Janet Jackson of Cambodia, decided to collaborate, and came out with the coolest thing since I-don't-know-what. Check out Tiger Phone Card in particular. One caveat: the "album in stores" thing should be taken with a grain of salt coz I could not get it except via online--maybe it's an American thing... This album is definitely worth exploring if you are into indie/fusion.
Post a Comment
Read more

You Have to Know Powers of Ten to Get This One

HAHAHAHAHA--this post is really funny if you have been a fan of the Eames' Powers of Ten film(s) already. Here is what I found on a wacky little website called xkcd about math, comics, language and a whole bunch of other things: To see the original context, go here .
Post a Comment
Read more
May 04, 2008
"Eventually, everything connects." Charles Eames
Post a Comment
Read more

Look for the Blue Umbrella!

The ever popular and usually free ROMwalks have started again for the season. Twice a week, on Wednesdays and Sundays, you can join a well-informed docent on a walking tour of one of eleven areas of Toronto. They have a way of bringing out the most interesting historical details about people and places you might have been a little fuzzy about. Groups are divided into manageable sizes, the walks are not arduous, and are long enough to make the excursion worthwhile without boring you. For more info on ROMwalks, go to the Royal Ontario Museum website or pick up a flyer at your library or the ROM. FYI, you look for the blue umbrella at the site to find the guide and the right tour.
Post a Comment
Read more

May 04, 2008
Next Jazz Vespers takes place after your Mother's Day Brunch at 4:30pm at the usual venue, CCDP . The Colleen Allen Trio is featured. For more info, see the site or call 920 5211.
Post a Comment
Read more

Sunday May 4th at 6:30pm at the Church of the Messiah, Bold Steps Dance Studio is showcasing talent honed by teacher and choreographer Meghan Bold, highlighted on this blog previously. Traditional and modernized highland and step dancing are on the playlist, with great music and loads o' fun. Join the event at 240 Avenue Rd. See Meghan's facebook and website for more info.
Post a Comment
Read more
More posts