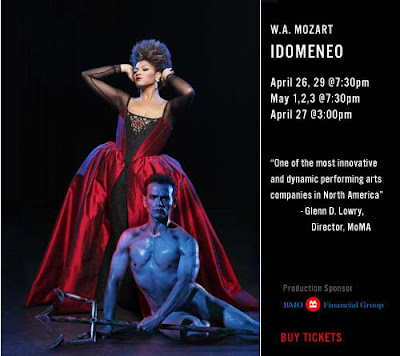 As per a previous post, don't forget that Opera Atelier's Idomeneo begins this week! To recap: this is Measha Brueggergosman's Mozart opera debut with this company for six performances between April 26th and May 3rd at the Elgin Theatre (189 Yonge Street). Tickets are $30 to $165 and are available through TicketMaster 416-872-5555, on-line at www.ticketmaster.com or at the Elgin Theatre box office.
Idomeneo is the story of "the Greek hero of the Trojan War who is forced to choose between the life of his son and a terrible promise he has made to Neptune, the god of the sea. This production promises to be a once in a lifetime event and will feature the only man in the world capable of singing the role of Idamante - the extraordinary American male soprano, Michael Maniaci." (Source: Opera Atelier website). I have heard him before, and he is something to behold! Then again, so is the Tafelmusik Orchestra. This promises to be yet another production of OA that is fit to satisfy the worst hedonists!
oa