January 31, 2016
It just worked out that four works I encountered recently—in a movie, a foreign film, a video and a novel—all dealt with various aspects of death. Surprisingly, none of it was depressing. 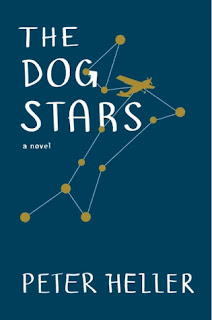 Book cover design by Kelly Blair; image from www.goodreads.com
Well, okay, some people find the apocalypse depressing, but I LOVE it. Especially when it's presented as well as in The Road or Station Eleven.
The Dog Stars was recommended by a fellow editor when I put out a social-media call for apocalyptic-read recommendations. Peter Heller's first fiction book takes place in the next few decades after a pandemic has killed most of the population and left many of the survivors with The Blood Disease, an auto-immune system threat. The protagonist is tortured by an act in his past, let alone trying to survive a new agricultural production system, murderous gangs and loss. But despite his flaws, we cheer and cry with Hig all along. Best of all, the book manages to have a satisfying ending, which is rare in this genre: it's not all tied up, some things are left unexplained and there is some sense of hope remaining. And yet, you feel that even if these last people die off too, the characters have experienced enough imperfect redemption that you would be all right with that as well. 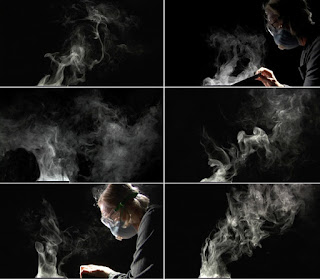 http://www.cbc.ca/beta/arts/ryerson-image-centre-spotlights-three-daring-photographers-and-did-we-mention-they-re-all-women-1.3412056
A lot of people were upset about another Spring Hurlbut project because it was photographs of individuals' cremated remains. In anyone else's hands, it might have been ghoulish, but Hurlbut's respect for her subjects is obvious. Her 2008 video of the release of these ashes from their urns is both beautiful and graceful. Wisely produced without sound, this slow motion group of six videos quickly becomes meditative. One of the subjects was her father, and I found myself thinking about my own deceased parents, and wondering about the spirits of Hurlbut's subjects before their deaths; somehow, I felt I could perceive those spirits through the way the ashes moved. This exhibit is on at the Ryerson Image Centre until April 10. Also on til then is a retrospective of Wendy Snyder MacNeil's photography and video periods and projects, which are disparate and often affecting. 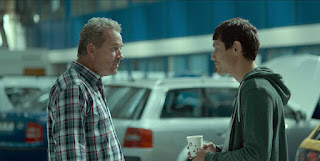 www.rogerebert.com
TIFF is currently showing Un Etaj Mai Jos/One Floor Below (2015), billed as a brilliant psychological thriller by Romanian director, Radu Muntean. It was interesting and it was satisfyingly slow climb to...nowhere. I don't mean you don't know who dun it; I mean the climax in a way was the denouement. Just not a story arc I've seen before, nor do I think it works. I wanted it to, but the whole thing was a bit flat.
Worst of all were the English subtitles, my pet peeve (as a viewer as much as a captioner/subtitler). For instance, "Let's" for "let's go"; "An left" rather than "A left"; "mother f***ers" as two words; unpunctuated "What's up boy"; and an idiomatic translation issue, "Are you going to pay for office hours?" which was to convey that a man was frustrated that he was losing billing time and thus income due to a dely. Disappointing as a film viewer: as a captioner, I know how long the viewer is given to read and take in each line of correct closed captioning, so being tripped up with subtitles creates a stumble in reading and ongoing comprehension. As a caption editor, I sigh at yet another un-copy-edited subtitle file I could have worked on. 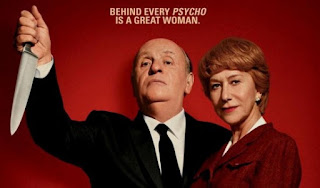 http://www.thenerdpocalypse.com/wp-content/uploads/2012/12/Hitchcock-poster1.jpg
Another meh flick was Hitchcock (Sacha Gervasi, 2012: wow, time flies! I thought I was only a year late seeing this). Let me start by saying Anthony Hopkins is one of my favourite actors I was disappointed in Anthony Hopkins, Scarlett Johansson and even Helen Mirren; I dont think they even tried in casting Anthony Perkins. Like much of the production of Psycho according to this film, it was very meta in that it seemed chaotically produced. While I'm sure it's a very difficult mimic, I didn't think Hopkins' portrayal was at all convincing—put your chin down, man!—and his focus on losing his bepooled house rang untrue for an artistic genius. Mirren was reduced to portraying too much the weight-nagging bossy boots aspect of his wife (if that's even true) rather than her brilliant support to her husband's work. I could care less about the Janet Leigh character.
There were some positives, though. I found the issues surrounding censorship and film rating politics of the time interesting. I thought the introduction was good and the extro was genuine and fun. But perhaps the best part of the movie was the section that was about the premiere itself of Psycho: both Hitch's and the audience's reactions were real and you can really feel the sense of terror that existed at the screening.
Maybe it's good that I didn't rush out to the cinema in 2012 to see this one. Recommended for your next bout of couch-ridden flu.
No wine and cheese awards for the movies this week!
apocalypse closed captions cremation Dog Stars Hitchcock One Floor Below photography Station Eleven subtitles video