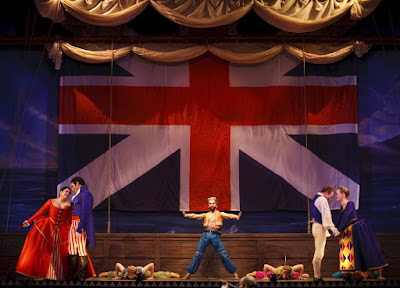 Photo: Bruce Zinger / Amanda Pabyan, Frédéric Antoun, Curtis Sullivan, Lawrence Wiliford, Carla Huhtanen in Opera Atelier's production of The Abduction from the Seraglio
Can you imagine the fun of traditional panto married to the music of Mozart and still in control of artistic integrity? Opera Atelier does not disappoint: they manage to present all this in The Abduction from the Seraglio, with four languages to boot!
Last night's opening of this latest presentation by Opera Atelier was an interesting meld of genres. Certainly, audience members included people from different arts such as Robert Cooper, Veronica Tennant and Michael Maniaci (who returns to OA in April for The Coronation of Poppea!). Tenor Lawrence Wiliford stole the slapstick/physical comedy category with his Pedrillo, while bass Gustav Andreassen (Osmin) and bass-baritone Curtis Sullivan (Pasha Selim) were entertaining Turks in their own right. And, as usual, Carla Huhtanen played Blondie with a finesse that makes me anticipate the day she will be the lead at OA; for now we can also enjoy her at Tapestry New Opera. She is musically and theatrically versatile, and while my personal preference leans towards the serious, she makes funny fun, and not dumb(ed down).
So this commedia dell'arte works on many levels. I must sound like a) a broken record or b) a paid plant, but what can I do? It's always the same: the Atelier Ballet was beautiful, Tafelmusik's Orchestra and Chamber Choir are luscious and intimate, and the sets (Gerard Gauci) and costumes (Margaret Lamb) first rate. No wonder Opera Atelier is in the black and holds Dora Mavor Moore, Ruby and Muriel Sherrin Awards. I'm just grateful that we have a Canadian product (Corner Gas aside) that is internationally recognized and artistically valued.
Now, if we could only get those few ignorami in the seats to stop talking; one day I'm going to jump on stage and join Marshall Pynkoski's intro, strike a Vicky Gabereau-like attitude and teach them audience etiquette.......but you've read this rant before..
The Abduction from the Seraglio continues November 9 at 3pm and 11, 12, 14 and 15th at 7:30pm at the Elgin Theatre at a bargain $30 to $135, or $20 if you're a young'un, i.e. under 30. Go to their site or call TicketMaster at 416 872 5555.