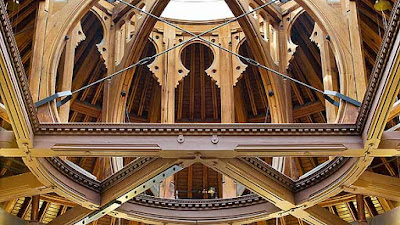 from cbc.ca/arts:
A renovation of the University of Toronto reading room has revealed architectural details hidden for almost a century.
Diamond and Schmitt Architects discovered carved wooden trusses, rafters and a dramatic glass skylight while renewing the heritage wing of the Gerstein Science Information Centre.
"No one at the university could remember the ceiling ever being exposed," said Gary McCluskie, a principal at the firm.
The ceiling was covered up during a renovation in the early 1900s when metal bracing was installed to support the trusses. McCluskie said he believes the bracing was covered up because it was considered unattractive.A false ceiling had covered the carvings and a skylight for many years. (Diamond and Schmitt)
In the redesign of the Gerstein Reading Room, architects integrated the bracing into their ceiling design, exposing the woodwork and skylight.
The ceiling was in remarkable condition despite being hidden for decades. The neo-gothic carved woodwork was cleaned and is now visible from the library.
The renovation, funded by the Frank Gerstein Charitable Foundation and the Bertrand Gerstein Family Foundation, is part of a larger transformation of the original library. The Gersteins are a prominent Toronto family that have also donated to York University.
The library was constructed in 1892 after the original library burned down in 1890. It was renamed in 1997 after its benefactor, the Gerstein Charitable Foundation.