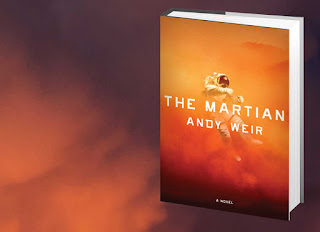 I just finished ripping through the 369-page The Martian by debut novelist Andy Weir, self-confessed science nerd. This year, I have read more fantasy/sci-fi than ever, and several books have been about scientific disasters and/or space, but I tend to go for the more blockbuster and less techie stories, having practically failed science every year after intro biology. We won't even discuss maths. I'm a luddite, and I don't want to be scratching my head during my precious escapism hours. So books that go into thrust and scientific measurements and velocity and the nightmare-inducing periodic table of elements are a little intimidating for me.
The story, if you haven't heard yet about the book or the upcoming Matt Damon movie, is about an astronaut named Mark Watney who gets stranded on Mars after a mission mishap. That's all I'll say in the interest of avoiding spoilers à la "Who Shot JR?". Clearly, if a science book (sci-fi or not) can keep me riveted, that's saying something.
I found it interesting to learn that Weir's success began with self-publishing this story in serial format for free; with good feedback, he decided to have it available as an e-book on Amazon, where he couldn't select 'free' as a purchasing option, so he listed it for 99¢. I think he's made up for any lost profits since then... I like this because he's just a guy, granted a science genius (see his bio), but just a guy who self-published and had every right to do so: he had a fantastic story with snappy writing and an infallible theme: survival or, as we sometimes like to frame things in criticism, man vs. environment. Weir handles the passing of time and different narrative POVs skillfully. He's got a not-lame ending, which comes right on the heels of the climax (no over-extended dénouement), believable characters and scenarios, and he's funny.
[Perhaps the one teensy problem I foresaw was that some of his funniest lines are steeped in the slang of today's speech, and I wondered how that would stand up in twenty years. For example, hero Mark makes a funny and then says to the reader, "See what I did there?", in the vein of many an Internet-soaring meme. It works in the book now, but perhaps such references may be missed by future readers. Not a biggie, but I did notice it.]
I can't wait to see the movie in November. I believe Matt Damon does not take on crap work, so I suspect it will be excellent. I never totally loved 2001: A Space Odyssey (don't be hating on me, now!), but if the movie is anywhere as good as the book, it'll be another Gravity or Interstellar in the space and sci-fi film canon. The only way this book/movie could be ruined is if the word 'sequel' is uttered by anyone: as we have learned repeatedly, just because you can, doesn't mean you should...
So after all these kudos, resulting in five Wine-and-Cheeses awarded (see previous post), what, pray tell you may be asking, did I not like about this novel? Page 370. It seriously sucked.