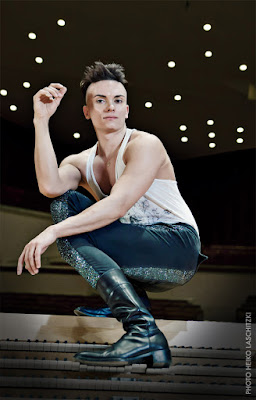 Cameron Carpenter is mountain range #1. I have been an organ geek (and opera for that matter) forever, so I don't know how I missed out on this guy. He's kind of like the Nigel Kennedy of the pipe organ: badass! He got some unflattering and inaccurate (and ironically pretentious) coverage on Tone Deaf, but if you ignore the ignorant copy and read the sensible comments (Yes! It's a Comments section that isn't poisonous!) and watch his Sony Electronic Press Kit, you may find yourself intrigued as much as I was. As someone said, Carpenter is dragging the organ into the 21st century. Just as I Furiosi have done for Baroque concerts. Check him out at his site and on Facebook. Cannot wait to see this guy live. 'Pretentious'? I think that's jealousy speaking... 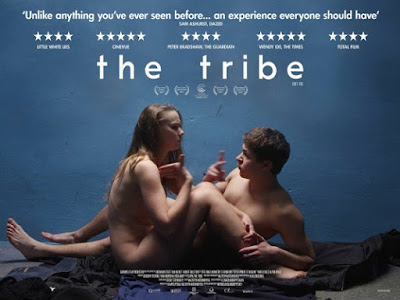 http://www.impawards.com/intl/misc/2014/plemya_ver2.html
Mountain range #2: The Tribe or Plemya (dir. Miroslav Slaboshpitsky, 2014). Ho boy: if you don't like violence, explicit sex or most human vices and failings, don't watch this. However, if you're willing to go for a ride, this is a unique ride. Filmed entirely in Ukrainian Sign Language with no captioning whatsoever, all the audience hears are environmental sounds—buses, squeaky snow, slamming doors. A good analogy for how lost many ESL students must feel initially. Filmed in the Ukraine, the scenes are mostly in overly lit, depressing buildings and cold, dark exteriors. And although the characters (and actors) are Deaf and play the roles of gang members, you still can see the vulnerability of youth and their need for belonging.
Mostly, though, it does have what I have heard elsewhere: visual poetry. Somehow that does transcend the brutality and starkness of the 34 shots that compose the film. That doesn't mean it is easy: it's difficult viewing, make no mistake. But it is affecting and thought provoking. Certainly a new take on sign language for the uninitiated like me. Just remember this descriptor if you decide to watch it: brutal. Also: beautiful. 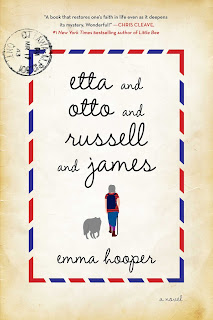 www.bdlive.co.za
On to #3. Okay, it's not a deep valley, but I was excited about my nightstand addition Etta and Otto and Russell and James by Emma Hooper. Having finished it, I'm left with mixed feelings.
Pilgrimage is a hugely important theme in my life and a favoured literary theme of mine. I LOVED The Unlikely Pilgrimage of Harold Fry, The Pilgrim's Progress, you name it. I love the movies (The Way; Walking the Camino) and the music (Oliver Schroer's Camino). I've walked one (the London-Canterbury Pilgrim's Way). I also love Saskatchewan and Can Lit. I also like writing that breaks 'rules'. But this debut novel had me vacillating between loving it and grumbling "rip off". I kept thinking The Great War meets Life of Pi. But that was the problem: I kept grasping at stylistic devices that worked to a point but seemed unresolved. Unresolved ending, I get. Messing around in the vein of experimentation, not so much.
I would recommend reading it if you are not a pilgrimage junkie like me. Now I'm just not so excited about a book further down the stack, The Hundred-Year-Old Man Who Climbed Out of the Window and Disappeared. I hope I can connect to the characters more in that one, even if it is the dreaded humour genre...