July 28, 2015
The hardest thing about writing [reviews] is being smart about books.
Neil Peart, creator of Bubba's Book Club, on CBC's The Next Chapter (5/1/15 Encore) 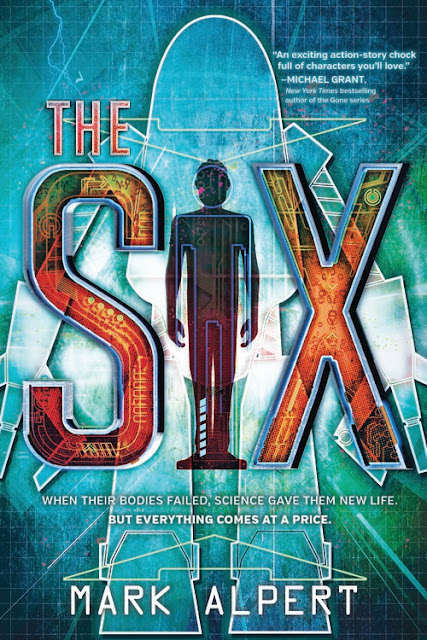 Advance Reader Copy. Cover art by Sammy Yuen
If this excellent book does not get adapted into a movie, I'll be very surprised.

I do tend to talk up great books, and perhaps avoid negative reviews, mostly because I feel it is important to boost our writers and other artists in a time of government undersupport and book publishing changes. I was eagerly anticipating reviewing Mark Alpert’s novel, The Six, and did it ever über-deliver!

There’re lots of YA fantasy novels being published these days, but this one stands out for several reasons.

First, while sci-fi in genre, it accomplishes something currently rare: it's believable. As Alpert says in his Note, the science is real, right now. Also, the author clearly has experience parenting teenagers: the characters are true to life and garner the reader’s empathy. Except that, like a stand-up comedian who doesn’t need to rely on coarse language, he has written dialogue that coveys all the attitudes of real youth without resorting to curse words or the slang of the day, the latter of which will lend the book to standing up in the future. Each young person is easily imaginable, not from explicit description but from well-crafted writing. And he doesn’t underline their youth by having them whine about adults being dumb, he does it by having us see the kids’ malleability as an advantage they can make use of. Refreshing for YA!

Not only is the story believable, it is accessible. I’m no oldster luddite, but let’s just say math and the sciences weren’t my strong point, and even I was able to follow the technology. This is key to engaging with the book. (No spoilers!)

Another reason this is refreshing YA lit is its use of the theme of disabilities. Mental health issues are treated with compassion. Terminal illness is addressed with facts rather than saccharine hesitance. A protagonist with Duchenne’s muscular dystrophy doesn’t sound like superhero material, but Alpert not only makes Adam Armstrong a role model for struggling kids, he opens to the reader who is unknowledgeable about the disease unbiased views on the emotions of young people who are dying, so that we are not pitying them but understanding them better than we might. Someone with MD may call me on this and say their experience is nothing like the main character’s (as Alpert notes, himself, as possible), but basically I am applauding the way the author tackles a difficult premise and turns it into an addictive story. And the added component of AI (artificial intelligence) doesn’t make the Pioneers mere superheroes, it makes them differently abled, without smacking of political correctness in writing.

Finally, the dénouement, already deftly created, ends with a last-page twist that could easily segue into a sequel. But again, spoilers are the Bubonic Plague of the arts, so mum’s the word.

So here’s my thought, Hollywood: (Please bare in mind that this is Tongue-in-Cheek Tuesday.)

Essentially we have a type of story where Patriot Games meets Hunger Games on AI steroids. Casting is key.

Sigma….John Malkovich (voice part)
Adam….Ezra Miller
Tom (the dad)….Ewan McGregor
Anne (the mom)…Sandra Bullock
Shannon….Elle Fanning
Brittany….Saoirse Ronan
General Hawke….James Woods
I was thrilled to learn that Mark Alpert has written four science thrillers for adults: Final Theory (Touchstone/Simon & Schuster, 2008), The Omega Theory (Touchstone, 2011), Extinction (Thomas Dunne Books/St. Martin's Press, 2013), and The Furies (Thomas Dunne, 2014). You can find info on all these books on his website: www.markalpert.com. Back to the bookstore I go….

By the way, The Six gets 5 Wine & Cheese Awards! 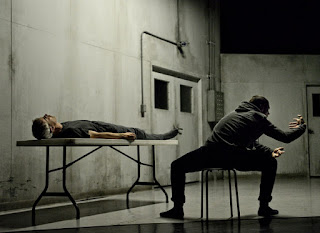 Jonathon Young and David Raymond in Betroffenheit. Photo by Michael Slobodian.
Under bewilderment, a double-entendre usage for this review, is the CanStage production of Betroffenheit. Let me be clear: I LOVE what Matthew Jocelyn is doing with non-rep theatre in TO. So much so that I became a subscriber last year. I believe he deserves all the accolades he gets in the media. But this piece was just okaaaay. I really liked 25 minutes of it. The rest left me asking, What just happened here? This is the part where I don't feel so smart. Maybe I don't understand basic things. But as my husband says, Art's gotta move you, and this part only moved me somewhat, and I suspect that was because I have seen what addiction does to people, so seeing it internally (I think) was something I responded to.
I loved the spare set. I loved the two key players (Jonathon Young and Jermaine Spivey). I loved that it was a combination of theatre and dance, with good A/V effects. The part I feel stupid about is this: I didn't get a lot of it. I understood it, I just didn't get why it was in there. Unlike the middle part that I liked, I felt the beginning and whole second act were redundant. What I did understand was systemic turmoil; think: Bob Fosse on Addiction. The sometimes robotic, sometimes lyrical movements were well executed by accomplished dancers. There was even the occasional laugh and cool puppetry. But the un-costuming, as I'll call it, (except for the variety show scene) did not support the piece, and while I think asceticism was the right call, I would have preferred to see AsceticismPro, let's say.
Part of Panamania, this show is slated to return to CanStage in 2016; I wonder if they will tweak anything so the Average Joe audience member does not react with betroffenheit.
http://www.cbc.ca/polopoly_fs/1.2994375.1426270249!/fileImage/httpImage/image.jpg_gen/derivatives/original_300/the-heart-goes-last.jpg 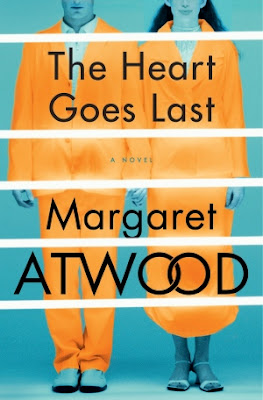 My final comment is just a quote from one of my favourite authors, my Dystopian Muse, Margaret Atwood, whose next novel comes out in a few weeks. Asked if writing in this genre reflects a pessimism about present times, she said:
Everybody is an optimist when they get out of bed in the morning. If you're really depressed, you don't bother doing that. We're always looking forward, and we're optimistic enough to think that there's going to be a story with us in it. So you'll notice that, in all of these dystopias, there's still somebody left standing at the end.     Canadian Living, Author Q&A, Sept/15, pg 50.