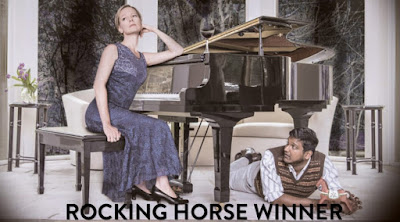 The Greek roots for 'hologram' mean the whole/entire thing that is written/drawn. I've got two reviews about the whole message—what's important in life, that is.
For many years on this blog, I have been singing the praises of Tapestry Opera (starting way back when it was still called Tapestry New Opera Works); they just never disappoint and readily accomplish what artistic director Michael Mori discussed last night about attempts to bring new waves (tsunamis?) to the expression of modern opera. Video, turntables, texting: nothing seems off limits to this outfit, and I think that's the reason for their success in turning increasingly more people onto opera. I'm a multi-decade subscriber to Canadian Opera Company and there's definitely a niche for baroque operas, too, but the emergence of collaborations such as Indie Opera TO (digital presence forthcoming) are proof positive of the coolification of opera in the 21st century. The other thing I like about Tapestry is (at least since The Devil Inside, a Scottish Opera co-production this year) their inclusion of the libretto with the program. But it makes sense, considering their history of fostering collaborative opportunities between librettists and composers, such as LibLab.
Last night was the final performance of Tapestry's world premiere of Rocking Horse Winner, another co-production with Scottish Opera and based on the D.H. Lawrence short story. It was 65 minutes of intensity, just as hair-raising as the 1949 movie of the same name. I was so looking forward to another gathering of Tapestry mainstays, soprano Carla Huhtanen, tenor Keith Klassen and bass Peter McGillivray and they delivered 100%, as usual. But new to me was Sri Lankan tenor Asitha Tennekoon as the tormented child, Paul. Not only does he have pipes, he gave a riveting performance that withheld no vulnerability and left the audience silenced by the end. It's not easy to go from having a credible kid's tantrum in opera and then die with the audience's sympathy.
This production, as does all good theatre, included clever set work such as curtains, silhouetting, puppetry and the use of real instruments (a Lowry piano as part of the mis-en-scène and doubling for accompaniment with more clever staging techniques). The string quartet and conductor Jordan de Souza laid the emotional groundwork for the drama; even their placement, with their backs to a majority of the audience, was a good way to keep the attention on the singers.
So what does Rocking Horse Winner have to do with holograms? It was, whittled down to the most basic of themes, about the whole and universal message that money does not necessarily bring happiness, and about children wanting to see their parents happy. 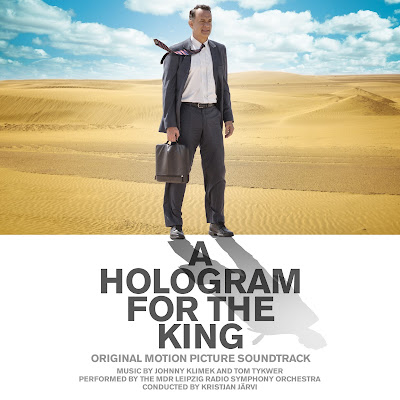 The more title-related piece I saw is A Hologram for the King. Not the most amazing Tom Hanks piece ever, granted; certainly the Talking Heads Once in a Lifetime intro was out of place with the film, but I could appreciate what director Tom Tykwer was trying to set up with it. There were other problems, such as unresolved story lines (e.g. the Hanne relationship) and underdeveloped characters (his team, his daughter). But I found it to be quirky, à la Groundhog Day for its repetition devices, or like The Party for its display of bewilderment about cultural customs. I also thought Alexander Black was a fun side-kick and Sarita Choudhury was her reliably sexy self (possible girl crush here).
Ultimately, the whole message of Hologram was similar to the opera's: we constantly worry about letting our kids down or letting them see us unhappy, and we especially don't like failing at the American Dream, even if we won't admit to ourselves or others that money is important to us.
Two other messages, one literary and one about lifestyle. 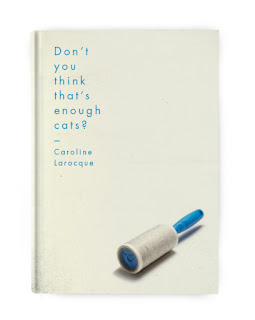 Unfortunately I heard this on CBC's "The Next Chapter" too late (it is now temporarily halted due to popularity) but graphic designer Steve St. Pierre created Jacket Everyday, a project to illustrate (gratis, by the way) telling phrases from people's lives as a form of memoir. Damn, I had such a good life-summarizing phrase, too! 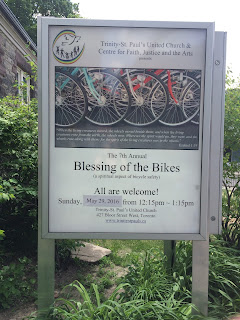 Walking to a client's office last week, I noticed this sign about an annual service at Trinity-St. Paul's. I have been to a very moving Blessing of the Animals service (not a woof nor a meow emerged from the attendees, ostensibly because they felt the sacredness of the event; that or they were scared to death), but I thought this was an interesting addition to the liturgical rites of the Church. If we are to see as all aspects of life as sacred, and if faith is relevant to all aspects of life, why not include something that involves environmentalism, transit, leisure and community? I don't have a bike, but if I did, I might have attended. 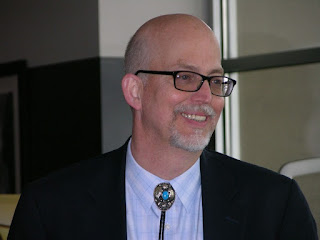 photo credit: Rose M. Sweazy
Finally, a little teaser to say that I will be interviewing novelist (and indexer) Larry D. Sweazy about his novels See Also Murder and See Also Deception when we are both at the ASI/ISC 2016 Indexing Convention in a few weeks in Chicago. Looking forward to talking shop and the writing process with him!
I'll report on some other things from my first visit to the Windy City, too.
Asitha Tennekoon bicycles Carla Huhtanen Chicago Hologram for the King indexing Jacket Everyday Keith Klassen Larry D. Sweazy Peter McGillivray rites Rocking Horse Winner Tapestry Opera Tom Hanks