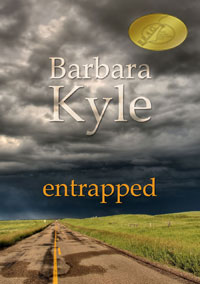 I was so entrapped by Barbara Kyle's novel that I devoured it in two days. Another dinner not cooked… *

This thriller will please fans of Linwood Barclay, Paula Hawkins or Gillian Flynn—all the left-field twists and turns are there, plus you actually learn something, and without boring exposition.

One of the things I loved most about the setting of the book was how unabashedly Canadian it was. Kyle includes doffs of the hat to our coloured bills and ‘bull’s eye’ coins, maple syrup, the RCMP, Canada geese and the CPR, but there are no clichés or schlock: no cops ordering double-doubles at Timmy’s or references to losing hockey teams. These cultural markers are seamlessly woven into the plot. And the Canadian setting is actually part of the plot. (I don’t know if the situation in the States is comparable, but I suspect American readers will find familiar themes.)

An American oil company with a Canadian division is extracting in rural areas in Alberta and ‘sour gas’ (hydrogen sulphide) poisonings from fracking have caused uproar from some citizens who are opposed to it; then there are those who rely on the oil company’s annual payouts to use their land. That’s as far as I can go if I am to avoid spoilers. But destruction of the land (top soil removal, for instance) and industrial safety issues and accidents are definitely illustrated in the characters’ sub-plots. Canadian legalities are also touched on.

Another theme that the author brings into the story, again without sounding saccharine, is caring for family members with mental health and physical disability issues. I won't reveal the details of that either, but will let you discover Kyle's treatment of it in one or two of the characters on your own.

But that’s just the background! The industrial espionage, corruption and corner-cutting; the characters you think you know; the oppressive mood; love and betrayal, courtroom drama, mystery—who knew fracking could be so exciting? Perhaps I shouldn’t be so light about it, but it doesn’t read like Kyle wrote this novel from a soapbox: it’s just good story-telling, made all the more interesting by a refreshingly different backdrop. Call me uninformed or apathetic, but I found that reading about this issue in a fictional framework got me interested in the issues and implications for landowners more so than reading about them in news reports or investigations.

Barbara Kyle writes a successful historical fictions series, the Thornleigh Saga, which I would like to check out, but first I want to read her other thriller, The Experiment, which sounds right up my spec-fic alley.


*Actually, I seem to be doing that more and more lately, so perhaps I will start using a number out of 5 dinners not cooked, represented by wine and cheese, to represent how good a read it is. Entrapped gets 5 wine-and-cheeses.