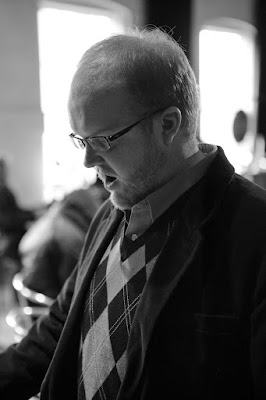 While Koerner Hall is undoubtedly gorgeous--subdued, organic--I felt this important piece deserved a more appropriate venue. Dark Star didn't promise to be a fully staged event, but it also didn't seem to know how to present itself in that space. The character/personae shifts did not work in full view of the audience, working around musicians, choir and props. The lighting, demi-costumes and choreography shortchanged a good piece of music and an excellent body of poetry. I also missed some of the libretto as the music overpowered it. nevertheless, the props were top-notch.
The singers, as always with Tapestry New Opera Works, were excellent. One of my favourites of their performers, Peter McGillivray, delivered throughout, as did Neema Bickersteth, Kristztina Szabo and Marcus Nance. The former, in particular, managed to coax a few laughs out of the audience during this largely sombre opera; librettist Jill Battson's wordcraft is versatile and intelligent enough to manipulate a full range of emotions, despite the difficult subject, so I applaud her effectiveness in creating those opportunities.
The finale faded into the house lights coming up to a cast which thematically did not appear for their recognition, and the audience did not recognize this simultaneously, so I feel the performers might have been unaware of the impact their offering had had, which was formidable.
The premiere was recorded for broadcast on CBC radio on World AIDS Day; I look forward to treating myself to an encore of this opera on December 1.