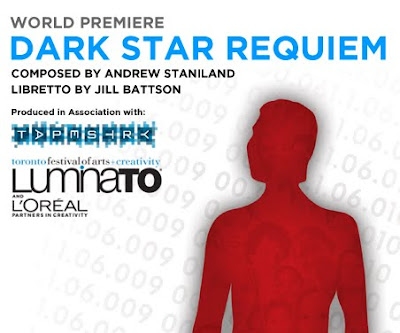 Luminato, Toronto Festival of Arts & Creativity is partnering with Tapestry to co-produce the world premiere of Dark Star Requiem, the third production of Tapestry’s 2009-2010 subscription season, a dramatic oratorio on the history of HIV-AIDS in North America and Africa. In this marriage of content and form, poet Jill Battson and composer Andrew Staniland trace the twenty-five year history of AIDS from its origins to the present day. This evocative, poetic concert work interlaces such topics as ecology, myth, politics, and family. While this text includes fragments from the Latin Mass for the Dead, the overall perspective is humanistic rather than religious.
Tapestry is thrilled to once again be part of Luminato. Our relationship began in 2008 when the Festival included the world premiere of Sanctuary Song by Abigail Richardson & Marjorie Chan, a world premiere opera for all ages from Tapestry and Theatre Direct which won the Dora Mavor Moore Award for Outstanding New Opera / Musical.
Dark Star Requiem is commissioned by Luminato, co-produced with Tapestry, and features 4 outstanding soloists and 2 percussionists together with two of Canada’s most lauded ensembles, the Elmer Iseler Singers and the Gryphon Trio.
Dark Star Requiem received additional commissioning support from the Ontario Arts Council and the University of Toronto at Scarborough.
Composer
Andrew Staniland
Librettist
Jill Battson
Music Director / Conductor
Wayne Strongman
Dramaturg
Tom Diamond
Soloists
Neema Bickersteth (soprano)Krisztina Szabó (mezzo soprano)Peter McGillivray (baritone)Marcus Nance (bass-baritone)
Chorus
The Elmer Iseler Singers
Ensemble
Annalee Patipatanakoon of The Gryphon Trio (violin)Roman Borys of The Gryphon Trio (cello)Jamie Parker of The Gryphon Trio (piano)Ryan Scott (percussion)Mark Duggan (percussion)Dark Star Requiem premieres Friday June 11 & Saturday June 12 at 8pm at Koerner Hall in the TELUS Centre at the Royal Conservatory of Music.
TICKETS: $30 – $50On Sale April 15, 2010 at ticketmaster.caVisit luminato.com for more information