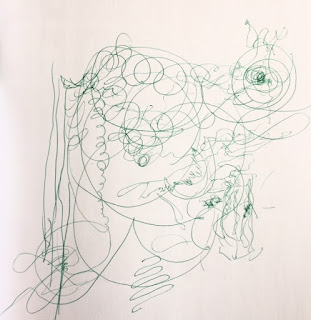 I hadn't known about Russian composer Vyacheslav Artyomov until I was asked to review two of his records for an upcoming magazine issue. To get aquainted with him, during my first listen I employed a drawing exercise from a book I use, pictured above, which suggested drawing the sounds of a piece of music. I think the result (this is Tracks 3–8) is accurate.

In my research about him, I heard that he also has done some film scoring, notably the 1995 short B&W film, Koza (Cocoon in English), which is a Dreyeresque piece that includes his work; you can find a clip of Nuri Bilge Ceylan's film here.

Artyomov was preparing for a life in astrophysics, but these two symphonies (parts of a tetralogy) are unlike The Planets, unless you think of them as über-Holst: they cause a visceral reaction and suggest a metaphysical cri de cœur. My initial reaction to them was that they sounded like the soundtrack of some 1940s film noir or an original-series Star Trek episode, which is apt since they embody mystery and the unknown. In his essay, “Musica Perennis,” the composer said, “Serious music is created by the spirit for the Spirit,” and these twin-released CDs reflect his view of music as a mediator between God and man, but also as science. While I find the Threshold of Bright World symphony more arresting than the Gentle Emanation, they are both accessible and, while Artyomov is often compared to Arvo Pärt, I hear a little more of Rautavaara.

The orchestration in Ave Atque Vale and Gentle Emanation is a little jarring due to the highlighting of the percussion parts. But Ave, Crux Alba, a choral (Helikon Theatre Choir) and orchestral setting of the Hymn of the Knights of Malta, returns to the majesty and mystery Artyomov is known for in his musical quest for spirituality. Tristia II, based on the 19th-century poems of Nikolai Gogol and with spoken parts read by Russian actor Mikhail Philippov, carries on the potential-soundtrack feel and allows us non–Russian speakers to hear the cries of the artist to God for inspiration, and the suspense in the middle tracks suggests Him mulling the petitions over.