A Sequel and Equals

They had me at "dystopian;" I changed my movie plans immediately. Equals (dir. Drake Doremus, 2015) is a surprisingly successful (but not perfect) movie with the poutily pretty Nicholas Hoult and solid Kristen Stewart as futurish Romeo and Juliet types (or are they?...), in a world that tonally, although not visually, echoes the one in Children of Men.
The story, shot largely in Japan, revolves around a post-apocalyptic world where life has been re-created, supposedly a post–common cold and –cancer utopia, but is threatened by SOS, a gene defect whose arc is like real-life's experience with HIV-AIDS. Social constraints swiftly eradicate those with "the bug," called "Switched On Syndrome." There is a far-flung place, The Peninsula, where degenerates live, embracing social bonds, but it is a no man's land that, if emotions were present, would give the people the heebie-jeebies, so adverse are they to the thought of social contact with any caring. And, no spoilers, it is good that this place is only suggested in the movie.
There's a lot of good stuff to chew on in this flick. The set and costumes are stark, neutral and utilitarian. It made me wonder why 99% of the unisex trousers are a bit short (not in a trendy way); Doremus' minimalistic world has been created to satisfy every human need for existence and occupation, except for emotions, of course. The soundtrack is evocative and highlight sex scenes that are really more about newness, anticipation and emotion than illegal coupling. The imagined jobs and workplaces feature very cool computer graphics (seemingly the result of several companies' input) and the living quarters' simplicity and functionality mirror the society without social bonds. There are good performances by Guy Pearce and Jacki Weaver.
But there are problems with the film, too. Many of the characters' names are redolent of The Giver, The Matrix and/or the Bible: trying a little too hard. The main issue is that it is hard to act as a human being without emotions! The actors can't be robotic, but they also mustn't interact, walk, eat or play with any emotion, and not all of the cast is successful at convincing us they are "clean." An extension of that is: how can there be artists in that world if emotions have been genetically deleted? There's a good dinner-party conversation topic. Finally, while I appreciate that the forbidden lovers are meeting in secret, I couldn't hear half the bloody dialogue. Not just because they're whispering, but because the enunciation is not there or is lost to recording. Is that supposed to be intentional, suggestive? It's annoying and it detracts from the piece.
One last remark, about release and distribution marketing. In the movie posters I've seen, Kristen Stewart is wearing makeup, and the whole point of the movie is about the lack of embellishment and the sterility of the world. Could promotional people perhaps really learn about and support the crux of their clients' products? I suppose I shouldn't be surprised or disappointed, but come on, people! Makeupless Kristen still looks gorgeous and will sell tix.
A neat film, if you're into the f'ed up future like me. 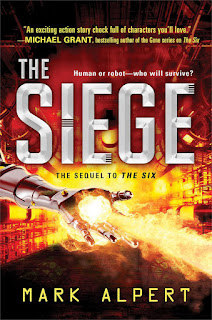 I've reviewed two of Mark Alpert's adult and YA novels within the last year, and had an interesting conversation with him in NYC in April. I was looking forward to the sequel to The Six, and The Siege did not fail its precursor.
There's so much I appreciate about Alpert's writing. First, the man can write page-turners! Whether it's well-written battle scenes or connecting to the readers' emotions, there is material in his books that will appeal to either sex. As for his YA books, he has a good grasp of teen-speak without sounding like he's trying to be hip. I know he has children that age, but it's still not easy to pull off, which is one reason that adult-written YA is not always successful. And I've discussed this before: Alpert expects his readers to be intelligent—they may have some knowledge of global affairs and some science literacy, but he promotes further investigation by presenting the material in an accessible manner and without talking down to his readers. I also like that his novels touch on social and spiritual issues. These are not books for airheads.
One warning if you read this book or give it to someone else to read: if you look at the last two pages, you are going to ruin it. Just don't.
Great fun! Hope to read more about the Pioneers....
AI battles computers. Drake Doremus dystopian emotions Equals Kristen Stewart Mark Alpert minimalism Nia Nicholas Hoult science Silas SOS the Pioneers The Siege The Six YA