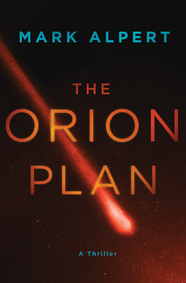 Mark Alpert’s The Orion Plan took me back to a large astronomy poster I had as a girl; I’d get lost in looking at its details for hours. This Wine and Cheese Award-winner gets my grudging Ebertian thumbs-up: I whinge because the reading went by too quickly, so gripping was the storyline.

Unlike The Six, which was a YA-oriented novel (see my review), this is an adult sci-fi thriller. (Although really, either book is equally readable by any age group, thanks to the lack of gratuitous sex in Orion.) But like The Six, there is non-saccharine treatment of characters with flaws or University-of-Life knocks; Alpert comments unapologetically about the notion of punishment and the breakdown of Western correctional systems, and he illustrates compassionately the issues around homelessness, grief, addiction, the call to ministry, ecological disasters and colonialism.

But he is not preachy. As Terry O’Reilly said in a recent radio show, “Story matters” and this novel centrifugal-force-flings you through the galaxy (well, part of it) with heart-sinking twists and turns. It’s got heart, humour (I’m thinking of the moving company’s name), excitement and science. Boy, does it have science!

And I don’t mean that negatively, luddite and science-phobe that I now am. Alpert’s longstanding interest and written work in the area of science serve the novel well: there is a balanced tension created between feeling excited by the content enough to keep reading (akin to The Martian) and enough author knowledge to make the story work. If you’d like to read more about his science-delving, see his provided links.

Isn’t the task of sci-fi to make the impossible seem plausible to the skeptic?
And surely, making Artificial Intelligence believable as a conscious, communicative life form—in New York City, no less!—is even more difficult. But aside from the social issues already mentioned, the moral of stewardship with technology (not just of) is a gentle constant in The Orion Plan and there is, thankfully, no hitting the reader over the head with a two-by-four with it.
I’m getting very attached to Mark Alpert’s writing, because he engages my heart as well as my need for a great ride. I look forward to sharing highlights of our conversation after I meet with him in NYC next month.

I finally watched The Lady (dir. Luc Besson, 2011) and was captivated, if you can use that word to include feelings of horror as well as admiration. Michelle Yeoh as Aung San Suu Kyi and the excellent David Thewlis as her husband, Michael Aris present the true story of this woman’s contributions to Myanmar (Burma) and the terrible costs she and her family bore as a result. She was considered an alien by some for her politics (i.e. not militaristic/communist) and also because she married a foreigner, a Brit. It is made all the more impressive when the end credits indicate that many of the film’s contributors must be thanked anonymously in order to protect their safety. A definite Wine and Cheese winner. 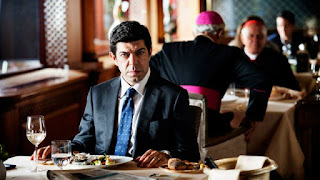 The final aliens may be found in the Italian film Suburra (dir. Stefano Sollima, 2015). If imdb.com is to be believed, it is receiving public acclaim and critical disregard. It’s set up with Crash-like storylines involving the mob, the church and down-and-outers hurtling towards an apocalypse five days hence. Pathetic fallacy reigns supreme with some Noah-like rain and there is a Cain and Abel-esque motif. There’s also some great B&W cinematography au fin, excellent acting all-round and cool treatment of casting credits. I see this apocalypse not as my usual, adored end-of-world kind of apocalypse, but rather an apocalypse of social structures. The aliens are the antagonists’ other-life sides, who kiss their sleeping kids and care for girlfriends and senile mothers.

Of the reviews I did glance at online, I didn’t notice anyone commenting on the title or the setting. Suburra (or Subura) was a not-so-great suburb of ancient Rome that would have housed and attracted outsiders such as this film’s characters into its vices. Also, the plot involves wanting to make the town of Ostia into Italy’s version of Vegas; the ancient port was of huge economic (trade) value to the empire and was ruled by wealthy merchants during the Imperial period, perhaps like the hinted-at Mafia in the film. It had perhaps similar shows of ostentation like Las Vegas does, although unlike Vegas it has no amphitheatre or circus! These points struck me as relevant, but I’d have to research the film and its direction more to see if these names were intentional or coincidental. Maybe it’s just more of the Singing the Ex-Magistra Blues.

In short, a dark, violent film but very interesting. Subtitles were grammatically well done, but idioms remained riddled with missed details and accuracy. (Production companies: I beg of you, hire me to fix your captioned idioms. I promise you I can fix your swear words and phrases so that they will wash over here. I am not proud of my sailor’s mouth, but it hosts an exploitable skill set!)
aliens apocalypse colonization David Thewlis Latin Mark Alpert NYC Ostia Rome sci-fi science stewardship subtitles Suburra The Lady The Martian The Orion Plan