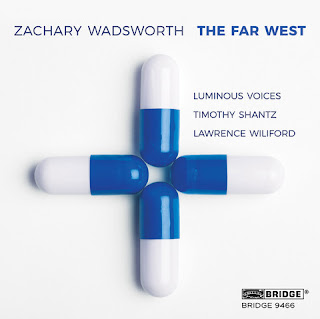 I’m submitting a briefer version of this for publication in the CD review section of a music magazine later this month but I wanted to expand on my necessarily truncated comments there. I was given The Far West to review: it’s a modern cantata for tenor, choir and instruments, written by the crazy-young Zachary Wadsworth, an American composer who’s already internationally known and respected. This work won the 2016 Choral Canada’s Outstanding Choral Competition Award.

Recently, I reviewed the stunning Trinity Requiem by Robert Moran, and its poignancy has kept me going back to it. The Far West is going to be on my shelf of favourites, too.

Tracks 1 and 2, set to the poetry of Paul Laurence Dunbar and Christina Rossetti, are complementary introductions to the cantata. His “Come to the Road” is an invocation to live life bravely, and her “Up-Hill” seems to echo that, although offering comfort with a sense of the table being prepared for the pilgrim.

The Far West opens with music evocative of MacMillan and Brickenden’s Celtic Mass for the Sea; in fact, not since that album have I heard a choral work that captures its subject with such well-curated and gut-punching text. Wadsworth’s piece is an homage to victims of AIDS, and it’s both achingly beautiful and horrifyingly vivid in its imagery as it paints portraits of Tim Dlugos, its posthumous librettist, and stricken friends.

His Divinity training interweaves references from Bergman (in “Parachute”) to AZT (in “Retrovir,” which is Latin for man turned back—I’m sure Dlugos knew that when he included the first lines, “Turn/back oh man”). Textual allusions to liturgical music and the Divine Office reflect the different musical styles, such as the funereally resolved first movement, “October,” the expansive choral chords of “Note to Michael,” and the baroque-ish “Heaven,” latterly with lyrics from the renaissance by George Herbert[1]. “G-9” reflects Dlugos’s curiosity and hopeful view of death as a “great adventure.” I’ve underlined several lines of text in the liner notes because of their impact.

Several times, the work evokes English staples, such as Parry’s “I Was Glad” or Fenton’s “Veni Sancte Spiritus,” and makes me want to run back to my days of church choir with Tom Fitches. Themes of reconciliation, despair and resignation are conveyed alongside word play with homophones and synecdoche. If this review is all more about the texts than the music, it’s because the poetry absolutely slays the listener but, while the words are the stars in this piece, Zachary Wadsworth has composed a votive in The Far West, and Wiliford and Luminous Voices shimmer throughout.
[1] For a great take on Herbert, see “Herbert Sucks. Donne is a Pimp.” Reminds me of when I taught Rossetti compared with the lyrics of songs by My Chemical Romance to grade 9 and 10 English students. 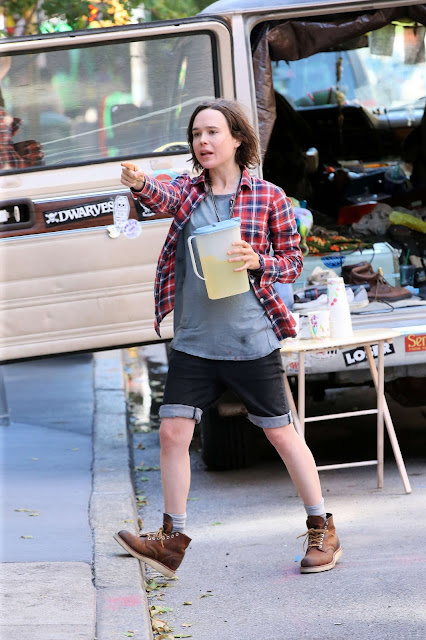 I think I'm officially in love with Ellen Page, who executive produced Tallulah (2016, dir. Sian Heder). I was bowled over this winter by Into the Forest, too. Guess I'll have to finally check out Juno!
This is a gem: it's quiet but packs a punch. Page plays Lu, a girl who's a little uncentred (although she thinks she's grounded) and who is led to take toddler away from an unfit mother (Tammy Blanchard is terrific) while finding a surrogate mother for herself (Allison Janney) and being tracked by OITNB's Uzo Aduba.
Page does everything with quiet reserve (must be those Canadian genes)—she can even sell lemonade in a way that breaks your heart! The story is one of redemption, one of my preferred themes. I won't say much more about it and will let you discover its worth on your own. There are several sub-plots around self-discovery, especially in the face of unwanted change, and the final scene allows the viewer to decide what one of the outcomes is: perfect for us non-Hollywood-y Canucks. Ignore the imdb.com stuff: it's neither a comedy nor a romance and, as usual, the comments are from people who don't know about suspension of disbelief. Haters. 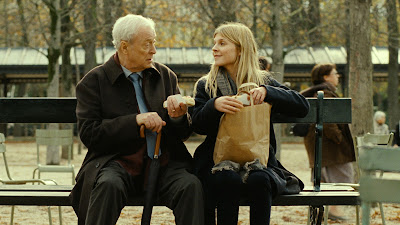 Mr. Morgan's Last Love (or Last Love on netflix; dir. Sandra Nettelbeck, 2013) is a largely quiet film about the noisiest parts of life: family relationships. It opens with Michael Caine's character clearly shuffling through widowhood, the length of which is demonstrated by the height of the stacks of unread-newspapers at the front door of his Parisian apartment. He meets Pauline Laubie (Clémence Poésy) and eventually he opens up a sealed window in his flat, the symbolism of which is obvious. While perhaps not the most original storyline, it is lovely to watch Sir Michael—I certainly never thought I'd see him doing country and western line dancing!
The title is not only a double-entendre, it becomes an enigma. Essentially the story is about the nature and mistakes of parenthood and parenting, which I suggest are not the same thing. There are a couple of nice moments, especially for me as someone who has been thinking a lot about death these days (these years). One is when Caine says:
Giraudoux said, you can miss a single being, even though you are surrounded by countless others.
Not exactly profound, but it's a helpful grounding thought when you think you're going mad, that others understand that feeling. Another moment is when there's a nod to Canada: he is naming all the American states with a place named Paris, and he adds that he thinks there's even one in Canada (which is Paris, Ontario).
Michael Caine often takes on films about people without the teary stuff. Not a bad way to unwind with the 'flix.
AIDS Allison Janney cantata Clemence Poesy Ellen Page grief Lawrence Wiliford Luminous Voices Michael Caine Mr. Morgan's Last Love parenthood Paris Tallulah The Far West Zachary Wadsworth