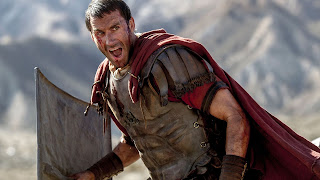 I asked Tracy Groot, author of Madman (which is next on my To Read list), if I could share her review on Facebook about Risen (2016, dir. Kevin Reynolds). Here it is, followed by my own thoughts on the movie.

Dear Readers, Writers, Storymakers, and Film Buffs,
File this one under: Risen, indeed.
Went to an advance screening of Risen last night. (Won tickets.) It's a film about a Roman tribune tasked with the investigation of a certain resurrection.
Had rational expectations with names like Joseph Fiennes and Tom Felton--our own Draco Malfoy--in the offing. But I wasn't sure about Kevin Reynolds. He'd directed a fave, Robin Hood Prince of Thieves, but that was what, 25 years ago? Who was this guy now? Was he still good, or did some Christian power producers hire a reasonably credible name to helm a get-‘em-saved agenda?
I feared it, because dang, I love a good movie but I’m hyper-sensitive to agenda. Too often I’ve seen craftsmanship sacrificed in favor of mission, and that’s something I don’t find inspiring at all. I despise agenda in whatever form it takes, pro-God or anti-God. I feel the same about agenda as Tolkien did about allegory, that nasty tension between “the freedom of the reader” and “the purposed domination of the author.” Give me freedom to interpret over purposed domination of producers and directors any day.
So this Agendaphobe (I’m sure there’s an official name for my malady) went to see Risen with a mix of hope and wary cynicism…and inside five minutes, my fears went up in a blast of gritty Judean smoke. For the next nearly 2 hours, I found myself transfixed and with a vague peripheral sense that I was experiencing one of those rare True Works I’d pay cash money to see again and again.
It’s got everything, folks: great story, great direction, great music, a great script, and great acting with Joseph Fiennes in a truly powerhouse performance. One particular scene became an instantly iconic piece of filmmaking, an amazing moment of intuitive camera angles bound to make it to film school textbooks; but I despise spoilers as much as agenda, so I’ll leave you to it.
In truth, I fear excessive glowing about this film because I’m a Christian and wonder if my glowage overlaps with dare I say it, some sort of purposed domination? (Ha ha!) Maybe I’m just way past relieved that Kevin Reynolds wasn’t some hired gun. This film came up from his toes. It's the real deal.
I’m not gonna worry about it too much. I’ll just say, Go see this film. It’s great. You’ll love it.
Groot, out.

I share a lot of Tracy's feelings. But one of my concerns was the casting of Cliff Curtis as Jesus: he is swarthier than some previous WASPy Christs, which is good, but would he--quite frankly--be too hunky to focus the viewer on him? Ultimately, I was impressed by the charisma that Curtis exuded, and surely that is a key in portraying Jeshua. Good stuff. Equally appropriate was Bartholomew's (Stephen Hagan) evangelistic fervor: appealing and highly likely. 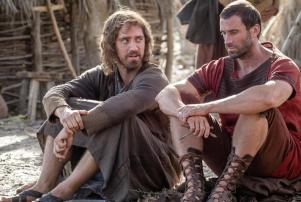 Underwhelming to me, however, was Tom Felton's performance. While Joseph Fiennes convinced me of Clavius's total perplexion at the risen body (and later of his conversion), I just kept picturing Felton's interior monologue during shooting, Okay, now I'm a naive tribune's aide...now I'll look perplexed, too...now I'll be toughening up.... Meh.

Favourite line: (Jesus) What do you seek, Clavius? Peace? Certainty? A day without death?

It's a refreshing take on the Easter story, and this ex-Latin teacher was certainly digging the Roman POV, even if it was hardly admirable. Definitely one to buy and re-watch.
Bartholomew Clavius Jesus Christ Madman resurrection Risen Romans Tracy Groot