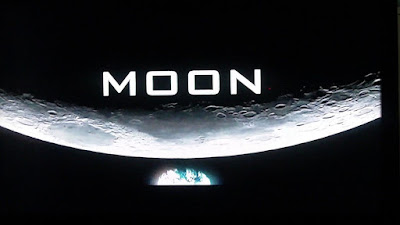 If you believe imdb.com's trivia page: Kevin Spacey read the script and agreed to voice Gerty but when the film was finished and only if he liked it. Having loved it, he recorded his lines in half a day. And that's how good this movie is.

Moon (2009, dir. Duncan Jones) is about Sam Bell's three-year contract to work alone on the moon for a company, Lunar Industries, that harvests Helium 3 as the main energy source for earth. The film has some of the feel of 2001: A Space Odyssey: Gerty is a kinder, gentler HAL; the credit graphics and some of the set type is groovy; there's lovely classical music. But there is also humour: the lunar rover has fuzzy dice in the front window and has the sign "Please Drive Carefully"; inside the station, Sam turns off his room lights with 'the Clapper'. The art direction is excellent and there are lots of in jokes if you know your science fiction canon. You don't feel like you're watching a sci-fi movie rip-off and much is credible. There are several 'WTF?' moments (some might be a teensy bit cerebral) but the movie keeps you engaged. Sam Rockwell's portrayal of the astronaut reminded me at times of Tom Hulce's performance in Amadeus--that's a good thing, FYI. Having just finished reading The Martian (see my review), I anticipate seeing similar motifs in the Matt Damon movie. There's not much not to love.

BUT--and again, if you put stock in imdb notes--supposedly it was unintentional that the four harvesting machine names are Matthew, Mark, Luke and John. Really? Then why not John, Paul, George and Ringo? And why then is a note with Luke's name changed to Judas? William Kurelek would have had a heyday with this. This movie absolutely can be seen allegorically both in its entirety (our consumption has moved to outer space and even there continues to rape natural resources and human endurance) and certainly in the harvesters' names. Come on.... That nonsense aside, it's a movie with "a bit of a mind flip" and definitely a good trip. 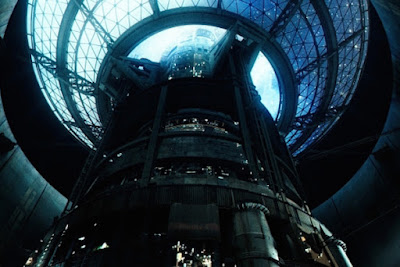 Ever read the terrifying Shirley Jackson short story "The Lottery"? Love the look of Mad Men? How about suspension of disbelief for The Truman Show? You might get into the (sadly, cancelled) TV show, Ascension. I recently binged on this one-season series and found quite a lot to dig. Never mind the haters and Syfy network doorknobs: yes, there are cheezy bits but there's food for thought and some good acting. Mostly, it's a cool premise and total food for conspiracy theorist-types. (Okay, technically it's not about our moon, but they do mention other moons.)

In the 1960s, a spaceship is launched with 600 humans bound for a multi-decade journey to a new world, with the mission of continuing the human race. Except [and it's not really a spoiler] they haven't left earth. Whaaaa...? Turns out it's a sociological experiment about human behaviour, with nefarious people at the real helm. There's a great bad guy (played by Brad Carter), a troubled young girl (Ellie O'Brien), the conflicted son-of-the-founder (Vancouverite Gil Bellows) and loads of fun plot twists. The silo of a "ship" evokes the setting of Hugh Howey's Wool. And the "beach" on one of the decks was like the simulated one in my mum's retirement home--so not exactly implausible. I studied sociology for my first degree, so I was just eating this stuff up. But then, theology (another degree) shows up both in allusions--a surname of Valis referring to the name of a Philip K. Dick book that stands for Vast Active Living Intelligence System; divine-type revelation to a child; the question of both the individual's and society's purpose of and in life; the sanctity of life itself. There is, I am learning, lots of philosophizing and relevance to the sci-fi genre, be it written or filmed. I hope Ascension is resurrected.... 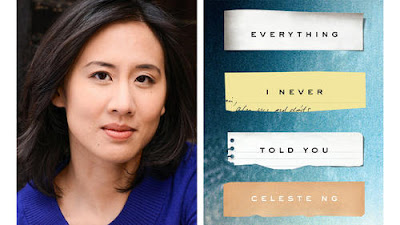 Think of a family issue. I bet it's in this book.

Celeste Ng's Everything I Never Told You is a good but painful trip. If you like family connection stories à la Amy Tan or Kim Thúy and can handle the emotional intensity and subject matter of a Linwood Barclay or The Killing, then dive in. It's incredibly taut yet beautiful, simple prose. The things that go unspoken in families can be as traumatic as the shouted, angry words, and Ng crafts the effects of family relationship nuances with quiet aplomb. An example: "All her life, Hannah had hovered at a distance from her brother and sister, and Lydia and Nath had tacitly tolerated their small, awkward moon" (p. 259). I had a few dog-ears about anachronisms, but maybe I'm just remembering the 70s wrong. Don't ignore this really fine writing.