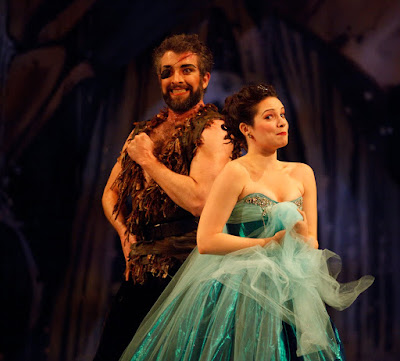 The word handle comes from a source akin to the old Norse meaning to seize or to capture; without venturing too far into the world of bad puns, I certainly had that experience last night at Opera Atelier's Acis and Galatea. Running through November 7th, this English baroque opera by Handel is thoroughly charming.

Co-artistic director Marshall Pynkoski somewhat downplayed the piece, reassuring the audience that despite its shorter duration, it had received the same rehearsal and production budgets as any of their offerings, but noted that it was simpler. Well, less is more, apparently.

For example, the company had the collective smarts to use synecdoche: one feather in the hair to indicate that a dancer was a bird. Why does that suffice? Because members of the Opera Atelier Ballet can convey their role through their movement alone; they don't need a 'bird costume'. The one set and lack of costume changes for the principals hleps us focus on the narrative. Tafelmusik Baroque orchestra seemed especially fresh, and the Tafelmusik Chamber Choir were definitely of one voice. It was as sweet a love story as one could hope to see.

I noted the classics class with their teacher from my alma mater in attendance. Indeed, I wish I had had her in grade 8. Last night's performance was perhaps the first time I have ever really enjoyed a story from mythology (sorry, Mrs. Fenning). That's anathema, coming from a Latin teacher, but heus! I do my best now.

Despite the bittersweet/tragic ending, there were a couple of gags which OA managed to pull off well. These involved goats and a cyclops. This cannot be an easy task in baroque opera and ballet. But then, Opera Atelier has been pushing the envelope for 25 incrementally improving years now. Kudos to them. I'm looking forward to their next quarter century.