"The Big Night Out" 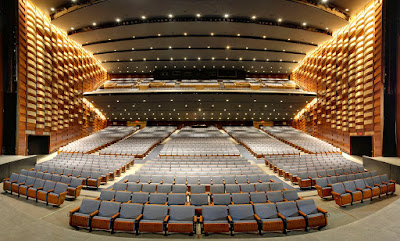 But let's reminisce for a bit. I remember [yeah, yeah, I sound like an old fart...] going to the O'Keefe Centre (said Sony Centre) at age 9 in a long dress to see Zero Mostel in Fiddler on the Roof, performing there with the COC's production of Tosca, as part of the Canadian Children's Opera Chorus, seeing The Nutcracker and Humperdink's Hansel and Gretel......you get the picture. Way back in the Jurassic era, the O'Keefe was THE destination for quality arts in Toronto. Now, we are blessed with the new opera house, RTH and we still support the blessed old Massey Hall: our city is dripping in good arts venues. Last night's re-opening celebration of the now-Sony Centre brought back many memories for me. You'll be glad to hear it is one reno that has not decimated a Toronto landmark; it is remarkably the same. Same old phone booths just fancier phones, same old brass fixtures in the marble drinking fountains, same old York Wilson The Seven Lively Arts mural above the interior entrance. That is good. I don't like change. But the place has certainly entered the 21st century: a huge digital multiscreen greets you upon entry. There is now a Sony Store where the old main floor coat check used to be. There are more women's washrooms, but still long line-ups for them. Don't know where the $28 million went, but hey, status quo rocks. Oh--except those cool autographed B&Ws of the centre's previous stars? Yup, they're gone; now on changing digitized screens. That's one "dislike" click. Although the new seats are comfortable and cupholders(!) invite in-performance refreshment. There's a nice little section on the centre eponymously named in the Saturday September 25th edition of the Toronto Star if you'd like more deets.

Ok, so now that we've established that I'm not too unsettled, on to iD. This is a punked-up, urban melding of hiphop/breakdancing and acrobatics. Cirque de Soleil it's not, and I don't think they mean it to be: success number one. The audience (those under 70 who could handle the pulsating Sony sound system and didn't leave at intermission) was wowed by the circus fare we all thrill to: contortionism (I'm sorry, but that was a bit OTT), trapeze and ribbon and pole aero-artistry, chair-tower balancing, springy stilts and pogo sticks. The new elements were the BMX-let's-pretend-to-run-over-the-audience-'volunteer'-and-stop-just-short-of-landing-on-his-face/crown-jewels-with-the-wheels, rollerblading (the guy was clearly a former ice skater--good stuff), what I can only call Mega Trampolining, and 17 kids who apparently do Pilates for 6 hours a day. But you know what was my favourite little spot? The guy who cycled across the stage once on a little 6 inch bicycle. Go figure. Simple is better. While I couldn't claim to dig the choreography (SYTYCD is more my scene), I did appreciate the video projections and their set design which were incredibly versatile and in sync with the vibe of the show.

I never would have thought that the O'Keefe [OK FINE: Hummingbird...] Centre would morph successfully from a primarily operatic stage into a venue for a circus, but there you have it. It bodes well for their line up of disparate cultural presentations this year: everything from the Kirov Ballet to The Grinch. Yet another monthly contributor to the listings in Wholenote Magazine. Welcome back, O'Keefe/Sony! It's been a long two years.

ps But could someone not have done the math? The majority of the 3100 bums in seats are female: why aren't there 500 bathroom stalls? Then you wouldn't have to choose between lining up for a drink or dealing with the outcome....

ps I still have Zero Mostel's autograph. Thanks, Daddy.